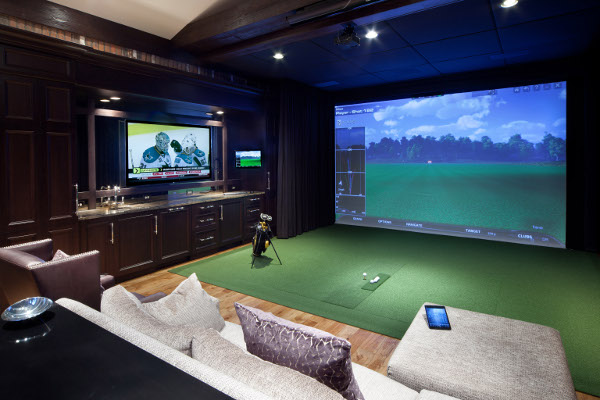 This homeowner can wake up on a Saturday, play 18 holes of golf on a PGA-caliber course and not worry about calling ahead for a tee time.

Then he can grab a seat for the big football game with 50-yard-line-like views, without requiring a season ticket or visit to StubHub. After the game it could be a fun time for dinner and a movie, but there’s no need for reservations or a ticket to catch a blockbuster. In fact, there’s no reason to even leave the house at all for this type of jam-packed day.

One room serves as the destination for all of the fun, thanks to the custom electronics pros at ZIO, Winter Park, Fla., who designed this multi-faceted theater room, which took honors as CEDIA Electronic Lifestyles’ Best Media Room this year.
Indeed, this room scores big on every level. The homeowner can spend hours upon hours in here, which is certainly rewarding considering it took the team at ZIO more than 300 design and labor hours to complete (almost a hundred for the design, engineering and programming alone).

In one configuration, the room acts as a golf simulator, featuring an About Golf simulation system that uses a projector and screen combo, along with the software to tee it up at the wealth of courses offered. In another configuration, it’s a high-performance movie theater, complete with surround sound to immerse the homeowner in any game, or movie and TV show, that’s on the big screen. If that’s not enough, when golf is on the docket (of course, really any time) there’s also a 70-inch flat panel in the room for watching sports or anything else on the 10 available sources in between holes or while others are swinging away.

But it wasn’t as simple as using the same projector and projection screen for both major activities and snapping your fingers to switch gears—although between the Crestron automation system’s programming and the iPad Mini interface going from golf to Goodfellas is still pretty easy. The solution necessitated a projector for the golf simulation and a fixed screen that would take the abuse of golf ball target practice. Movie and sports viewing would be better served by a home theater projector and a theater-specific screen, in this case one that could be retracted at the press of a button when not in use.

“The projector for the golf system is just a basic InFocus business projector. Because the images projected were always bright outdoor scenes, a home theater-style projector was not necessary, and because the golfer stands reliably close to the screen the projector needed to have a very short throw (distance from the lens to the screen) so the image isn’t obstructed by the golfer,” ZIO’s Peter Shipp explains. “We actually tried very hard to use a single projector for both systems/screens, but it just wasn’t possible.”

So a beam was installed along the ceiling in the middle of the room to accommodate the projector for the About Golf system. For home theater, a Digital Projection M-Vision 400 projector was mounted in the back of the room, with its long-throw and brightness capabilities enough to produce high-quality images on a 150-inch Stewart Filmscreen Firehawk motorized screen.
Complicating matters is that, well, golf balls have a tendency to bounce back when they’ve hit screens after being struck at high speeds by drivers and 3-woods. And the design of this room featured a bar on the left side where the 70-inch Sharp TV resides, plus some big windows along the right side. ZIO incorporated more motorized goodies to protect against wayward shots and ricochets.

“We’ve done a few other golf simulators but never one that combined into a single system like this,” Shipp says. “This was far more challenging because the space wasn’t so right. A typical simulator has hard walls with padding on the sides and ceiling up to about the point where the tee goes, in case a ball is hit toward those areas. In this room, we had to devise a custom drapery system where the drapes move and disappear (behind the golf screen) when not in use, while also providing protection for the bar and windows when the golf simulator was in use. We actually had more engineering hours in this room than we had in all of the other technology systems installed in the entire rest of this 6,000-square-foot house.”

ZIO customized and installed two separate, curved, motorized drapery tracks from Lutron, with one operating as a transitioning panel. The transitioning panel track moves a drapery panel between the golf screen and the Stewart screen, to hide the golf screen when not in use. There’s also a motorized blackout shade for the doors at the rear of the room, and when the drapery and shade are closed, it allows both projection systems to be used during the day—though both projectors have enough light output so the owner can also keep on plenty of room lighting while either is in use, Shipp says. 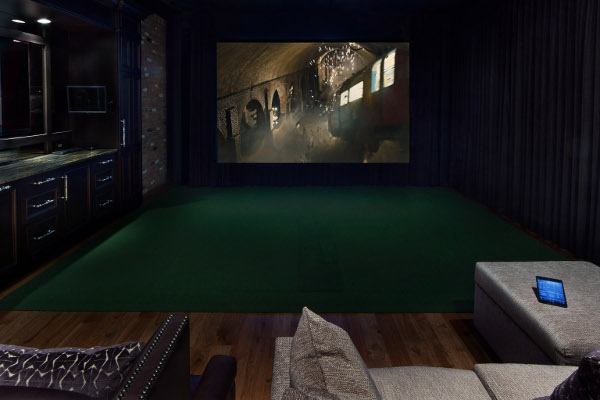 The audio installation was also affected by the request for a golf simulator. ZIO installed in in-ceiling surround system featuring Triad InCeiling Silver left/center/right models with frameless grilles that could fit well with the upholstered ceiling area in the front of the room. A Triad InRoom Bronze 10-inch subwoofer was placed on the floor behind the fixed golf screen. The audio was calibrated to Home Acoustics Alliance standards, while the video was calibrated to ISF (Imaging Science Foundation) standards.

“We methodically and carefully identified solutions that allowed each element of the two man cave systems to work flawlessly together. In the end, everything works great and the client loves the man cave,” Shipp says.

To bring your cool outside-the-box concepts like this into your home or business, contact Quality Audio Video in Denver, CO for a complimentary consultation.

Sorry, the comment form is closed at this time.